New York County (Manhattan) is the 3rd most populated county in New York behind Kings County (Brooklyn) and Queens County (Queens) and is the 21st most populated county in the United States behind Alameda, California . New York County is coterminous with Manhattan and is the most densely populated of the five boroughs. Manhattan borders the counties of Kings (Brooklyn), Queens (Queens), Bronx (Bronx), Bergen in New Jersey, and Hudson in New Jersey.

Addresses is constantly updating their information with new public records. Search on Addresses.com to find more information about New York County property records, criminal reports, and contact information on someone you know.

If you’re looking for someone and only have a name and their general whereabouts, you can narrow your search by considering the demographic of the people in New York County.

The gender diversity is not evenly split, as there are slightly more females (53%) than males (47%) in the county. An average household holds 2.1 persons, but 62% of the population is single (48% of women have never been married). If you’re searching for someone by name alone, consider they may have had a name change due to nuptials.

As of 2017, 28.7% of the population was born in another country, which is higher than the national average of 13.7%. The most common countries of origin outside of the United States are the Dominican Republic (527,485 people), China (441,157 people), and Jamaica (239,203 people). There are 1.78 times more White Alone residents in Manhattan than any other race or ethnicity, but the second and third most common ethnic groups are Hispanic/Latino and Black/African American Alone. This is consistent with the three most popular non-English languages spoken - Spanish (22% or 348,249 speakers), Chinese (including Mandarin and Cantonese, 6.13% or 97,123 speakers), and French (including Cajun, 2.06% or 32,591 speakers).

Manhattan employs 924,000 people, and the three largest industries are Professional, Scientific, and Technical Services, Health Care and Social Assistance, and Finance and Insurance (which is also the highest paid industry). 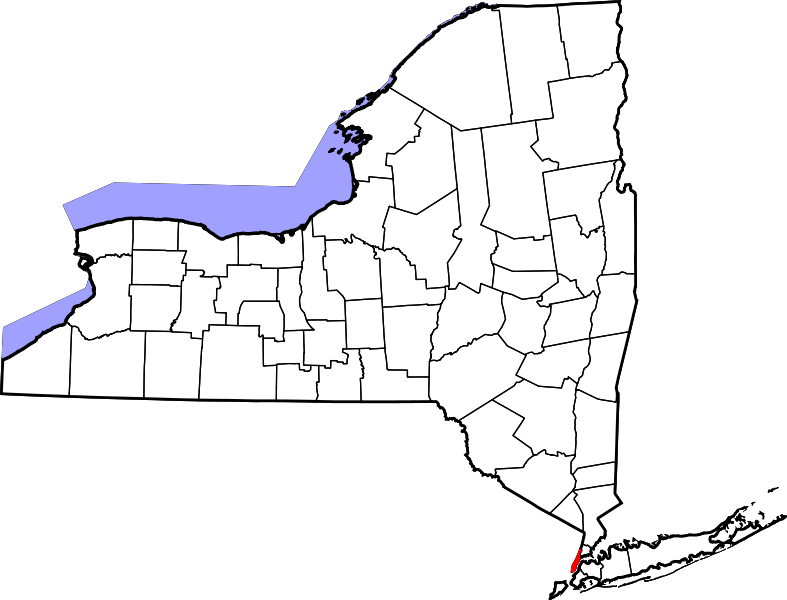 As populous as it is, Manhattan is only 22.83 square miles. This means the population amounts to roughly 1,628,701 people per square mile, according to census data from 2010. It’s the second smallest county in the United States by land area, larger only than Kalawao County, Hawaii, which has a land area of 11.99 square miles.

The borough consists mostly of Manhattan Island, surrounded by the Hudson, East, and Harlem rivers, several small adjacent islands (including Ellis Island and Liberty Island), and Marble Hill, which is the northernmost neighborhood. Manhattan Island is divided into three portions, each aligned with the county’s long axis - Lower, Midtown, and Upper Manhattan. The borough hosts many prominent bridges, such as the Brooklyn, Manhattan, Williamsburg, Queensboro, Triborough, and the George Washington, tunnels such as the Holland and Lincoln, skyscrapers, and a myriad of parks, most famously Central Park. The City of New York was founded at the southern tip of Manhattan.

New York County is lower than the national average for property crimes. On a scale from 1 (low crime) to 100 (high crime), Manhattan sits at 34.9, and the United States as a whole is rated 35.4. Property crime includes theft, burglary, arson, larceny, and motor vehicle theft. It’s worth noting however that property crime means there is no physical violence against the victim, i.e. these crimes are based on the owner being absent or asleep. In regards to violent crimes, New York County unfortunately comes in at 28.6, which is above the national average of 22.7. If you have specific concerns about someone, run a background check to find out if they have a criminal record.

Name Meaning: In 1524, a Florentine explorer named Giovanni da Verrazano became the first European to visit the area that would become New York City. He named the land around Upper New York Harbor “New Angouleme” in reference to the family name of King Francis I that was derived from Angouleme in France. He also named what is now Upper New York Bay (but was once called Bay of Santa Margarita), after Marguerite de Navarre, the elder sister of the king.