Maricopa County is the most populated county in Arizona with a population of 4.31 million as of 2017. It’s also the 4th most populated county in the United States, just behind Harris County, Texas. Its county seat is Phoenix, which is the state capital and the 5th most populous city in the United States. More than half the population of Arizona lives in Maricopa County. The bordering counties are Pima, Pinal, Yavapai, Yuma, Gila, and La Paz.

Addresses is constantly updating their information with new public records. Search on Addresses.com to find more information about Maricopa County property records, criminal reports, and contact information on someone you know.

If you’re looking for someone and only have a name and their general whereabouts, you can narrow your search by considering the demographic of the people in Maricopa County.

The gender diversity is pretty evenly split, although the percentage of women living in the county is slightly greater than men (51% women vs. 49% men.) Interestingly, those same numbers represent marital status among Maricopa County residents; 51% are single and 49% are married. On average, there are 2.8 persons per household. If you’re searching for someone by name alone, consider they may have had a name change due to nuptials.

As of 2017, 14.3% of the county population was born outside of the United States, which was an increase from 2016, when the number was 14.2%. This is higher than the national average of 13.7%. 55.2% of the county residents are considered White Alone, and the second largest ethnic group is Hispanic/Latino at 31.1%. It makes sense then that the most common non-English language is Spanish (20.9% of the population are Spanish speakers), followed by Chinese (including Cantonese and Mandarin, at .612%), and Tagalog (including Filipino, at .491%.)

The most popular industries in Maricopa County are Health Care & Social Assistance, Retail Trade, and Educational Services, but the highest paid industry is Utilities. 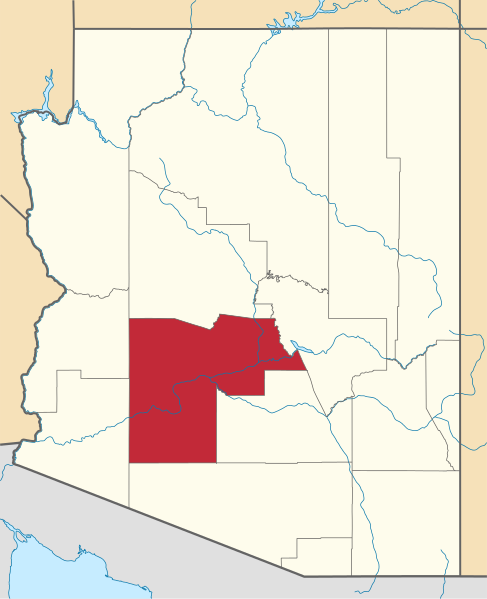 According to 2010 census data, Maricopa County has a land area of around 9,200 square miles, which is over 414 people per square mile. Within the 9,200 square miles is 42 square miles of water. It’s the largest county in the United States to have a capital city. Some of the other cities within the county are Glendale, Scottsdale, Paradise Valley, and Tempe.

There are five Indian reservations located in the area, including the two largest, the Salt River Pima-Maricopa Indian Community (east of Scottsdale) and the Gila River Indian Community (south of Chandler). The Tonto National Forest, which encompasses almost 3 million acres, is a national protected area within the county and is the largest of the six national forests in Arizona and 5th largest in the United States.

Maricopa County is home to a 315-mile trail that connects the major regional and municipal parks in and around the Phoenix metro area. Although it loops around much of the urbanized area, it also consists of four spurs that connect the loop mountain parks. Another natural site is White Tank Mountain Regional Park, which is located in the west-central part of the county. It encompasses 29,271 acres of desert and mountain landscape and is the largest regional park in the United States.

Unfortunately, Maricopa County is higher than the national average for property crimes. Property crime includes theft, burglary, arson, larceny, and motor vehicle theft. It’s worth noting however that property crime means there is no physical violence against the victim, i.e. these crimes are based on the owner being absent or asleep. In regards to violent crimes, Maricopa County comes in below the national average, making it safer than many other large metropolitan counties. If you have specific concerns, about someone, run a background check to find out if they have a criminal record.

Year Formed: Maricopa County was created from portions of Pima and Yavapai counties in 1871. It was the 5th county formed in Arizona, and eventually portions were used to create Gila and Pinal counties.